One of the details on BWOF 03/2008-126 I especially liked was the seam on the front legs of the pants. It’s actually a modified flat fell seam that is decorated with a satin stitch. I love subtle details, but I wanted the satin stitching to stand out - just a little. So, I considered using either woolly nylon (shown on left) or machine embroidery thread (shown on right) rather than all-purpose thread for the satin stitching. After some testing, it was easy to see that machine embroidery thread was the better choice.

On the 1” seam allowance, I drew a line 5/8” away from the seam line and pressed that amount to the wrong side, making both seam allowances 5/8 “.

The satin edge stitching is done along the pressed edge. I used a width of 5 and length of 0 .7 and Bernina’s foot #2 - overlock foot to prevent the fabric from tunneling under the stitches.

Once the satin edge stitching was finished, I sewed the seam, wrong sides together. Both seam allowances were now 5/8” .

The final step was to topstitch the satin edge to the fabric.

Typical of BWOF, a simple process was obscured under awkwardly translated directions. But with persistence and help (Tany pointed out the unequal seam allowances months ago when I asked for her help. I’m sure she’s forgotten by now!) I achieved a design detail I really like!
Posted by Elaray at 2:18 PM 7 comments: 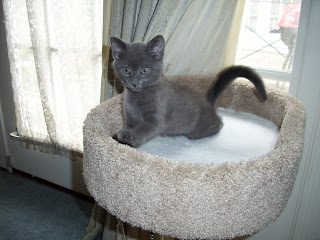 Tangi is the newest addition to my household. Tangi's mother belongs to a friend of my daughter. When my daughter learned the cat was expecting, she asked if we could have one of the kittens because she was concerned about me being the only thing that moves in the house after she went off to college. Tangi was the only kitten in the litter (tangi is Tagalog for "one and only"), so it was hard for the family to give her up.

She is adorable, but she is ripping my legs to shreds. I'd forgotten how playful kittens can be! They jump at everything that moves - drawstrings, shoestrings, hair, fingers typing on a keyboard, etc. And when they jump, their claws are extended. Trust me – kitten claws are S-H-A-R-P!! But, I'm a cat person and I will endure the loss of skin and blood because I know eventually, Tangi will treat me like I'm an unwelcome guest in her house. In the meantime, my blood type is A+. Let me know if you're a match. I may be calling you.
Posted by Elaray at 8:07 AM 15 comments: 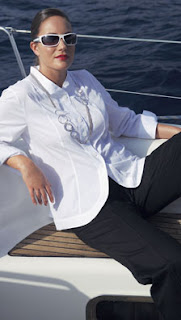 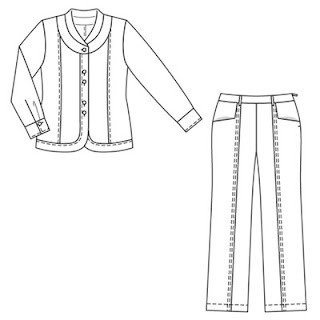 According to what I've read on the message boards, some people love to see the BWOF previews when they are posted on Burda Fashion and others prefer to wait for the magazine to arrive. I was in the "preview" camp until I saw this blouse. (I'm a person who reads the last chapter of a book before I actually get to it.) The online picture didn't do it justice. I liked it when I saw the preview, but when I saw it in the magazine, and I could get a closer look, I discovered how much I really liked it. And the pants also have a detail that is hardly visible in the either the online or the magazine photo. The front seam is satin stitched to look like piping. I had to read the instructions to learn about that little surprise! The pants, although rated 2 1/2 dots, are going to be a challenge. There are two welt pockets in the back. I've done welt pockets successfully, but they still intimidate me. Also, I'm trying a new pattern adjustment to give me a little more room in the thigh area. Hopefully, I'm not taking on too much with these pants.
Posted by Elaray at 8:30 AM 4 comments: 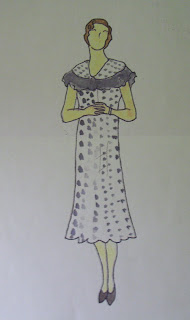 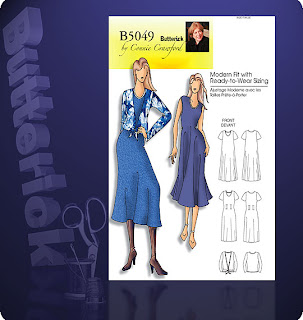 My first assignment was easy. I was given a detailed design sketch, the pattern and fabric. It was up to me to make the pattern look like the dress. My character is a housewife, so her dress was simple. It's based on Butterick 5049. When I sew for myself, I usually don't make major design changes to the pattern, so this was a new challenge for me. In this case, I had to add a zipper and an oversized Peter Pan collar with a ruffle.

This was a fun learning experience for me. I've always wanted to be able to look at a picture and make what I saw. But I'm not comfortable breaking rules and I've seldom strayed from the pattern's directions. That's essentially what I did here. I'm looking forward to doing this again.
Posted by Elaray at 8:00 AM 3 comments:

I like to support independent fabric stores whenever possible. Last week, Cloth & Bobbin, an independent quilting shop, celebrated their 1st anniversary. One of the activities was sewing pillowcases for ConKerr Cancer. I wanted to do something charitable with my sewing (and establish some good sewing Karma), so I decided to go to the celebration, even though I won't quilt (Don't ask me). I don't quilt, but I saw lots of cotton fabric I liked. It's bad luck to go into a fabric shop and not buy anything, so I bought two pieces from the sale table to use for pajama bottoms. I added t-shirts from Old Navy and – Voila! – I have decent sleepwear!

I used Simplicity 9330. These shorts were so quick to make - I traced and cut these in the morning and sewed them later that evening. I'm going to be making more of these.

My next BWOF project has (ominous da-dummmmm) DOUBLE WELT POCKETS!!!! I consider these pajama bottoms a sewing no-brainer – something to purge any sewing tension I might feel and something look back on if and when the welt pockets frustrate me.
Posted by Elaray at 10:00 PM 3 comments:

Whew! I think I started this outfit in 1987! Actually, I started on or about August 21 and September is almost half over and I'm just finishing. That's what working in a urban school district in September will do for you. During September, I feel like I'm running in circles, spinning plates while walking a tightrope, and I have a hard time settling down to sew.

Pattern Description:
Pants have sewn-on bands at the hem and pockets and sewn front crease

Did it look like the photo/drawing on the pattern envelope once you were done sewing with it?
Yes, basically.

Were the instructions easy to follow?
In making the bands on the pocket, I'd intended to make an oak tag template to use while pressing the curve. Tips like this are seldom included in most instructions – certainly not in BWOF instructions. I didn't have cardboard on hand at the time, so I made the template using something heavier than paper but lighter than card stock. (I'm going to have to "obtain" some oak tag from one of the schools in which I work.) Even though the template was lighter than I would have liked, it served the purpose and made pressing the curved seam allowance a little easier.

What did you particularly like or dislike about the pattern?
I always like the design details in BWOFs. These pants have a sewn-in crease and sewn-on bands on the bottom of the pants and at the pockets.

Pattern Alterations or any design changes you made:
I did my usual pants alterations: raise the waist and lengthen the legs. I raised the entire waist by ½ inch and the center front by an additional ½ inch to accommodate my belly. The belt loops on these pants were supposed to be placed a little below the waistband. I don't really like this look so I put them in the usual place, level with the waistband.

Would you recommend it to others?
Yes, these pants went together predictably. I would definitely recommend them to others.

Pattern Description:
BWOF calls this top a tunic. It has ¾ length sleeves held in place with tabs; double darts for shaping the front and back, faux pockets and flaps.

Did it look like the photo/drawing on the pattern envelope once you were done sewing with it?
Once again, the details in the garment are lost because of my fabric choice. Because I chose a print (quite a pretty print, I think), the blouse doesn't look a lot like the photo. I'm just a sucker when it comes to some print fabrics. I buy the fabric and I ignore that it might be at war with the design.

Were the instructions easy to follow?
Just when I think I've got BWOF instructions all figured out! "Baste lines to right side with a tacking stitch", they said. Sure – what's a tacking stitch? However, a quick google search answered that question. A tacking stitch is simple a basting stitch "similar to running stitch but with longer stitches". Couldn't they have said, "Thread trace placement lines?" It isn't a problem, though. I learned something new: tacking stitch = plain ol' basting.

What did you particularly like or dislike about the pattern?
I liked everything about this blouse: the way the darts shaped the silhouette, the tabs on the sleeves – all the design details. Of course, the design details are why I love BWOF so much.

I am learning to trust BWOF directions no matter how confusing they seem at first reading. The pocket piece on this blouse is not for a functioning pocket. The pocket piece is sewn onto the inside of the blouse, but there is no pocket opening on the front. At first, I thought the piece served only as a stabilizer for the pocket topstitching. However, it does more than that. It also serves as support for the pocket flap without the use of interfacing. This is an example of thoughtful and effective pattern engineering.

It did present some challenges, though. But I bought three more pieces of the same rayon in different prints. I think I'd better learn how to deal with the challenges!

Fabric Used:
I fell in love with this rayon fabric! I was determined not to leave the store without it. I purchased it from my favorite non Fabric Row independent store Hayes Sewing in Wilmington Delaware. The rayon was unstable and grew quite a lot in the sleeve cap. At first, I thought I'd traced and cut the wrong size sleeve. Easing the grown sleeve into the armscye was quite an adventure.

Pattern Alterations or any design changes you made:
This top was described as a tunic and is longer than a blouse, so I didn't make my usually length adjustment.

Conclusion:
Except for the "Incredible Growing Sleevecap", this blouse was a pleasure to sew. I'm going to go through my books. I know someone must have addressed reducing the ease in sleevecaps or stabilizing rayon.


This outfit practically screams "Fall!". I love the colors and I'm going to enjoy wearing this. 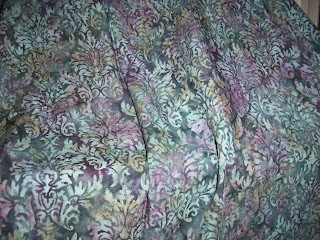 I made a big mistake while working on my latest project BWOF 10/2007 #129. While trying to ease the sleeve into the armscye, I realized there was no way this baby was going to fit. I realized I'd traced and cut a sleeve that was 2 sizes larger than the rest of the blouse. So, I went back to Hayes Sewing to buy more of the same fabric, which I really loved. Of course, there was no more fabric. So, I had no choice but to buy more fabric! I really loved the blouse pattern, too and I'm committed to it enough that I don't mind starting all over. It gives me a chance to try the woven fusible interfacing I ordered from Sew Exciting. After reading Lindsay's post about interfacing, I decided to try something other than Pellon. It arrived the day after I used the Pellon on this blouse. Now that I'm starting over, I get to use the woven fusible interfacing. So, there is a sliver of a silver lining.
Posted by Elaray at 3:27 PM 5 comments: