I must say, the dress was a big hit.  People were so impressed, it was embarrassing.  I think people were impressed because so few people sew these days.  Non-sewers probably don't understand how or why anyone would make a wedding dress.  Lindsey gave credit to me as the "Wedding Dress Seamtress"  in the program so I got lots of "You really made Lindsey's dress?!?!?"  The design was really simple – a sleeveless, empire waist, A-line dress with a lace bolero. (Neue Mode  22711) I used satin for the gown and it was very easy to sew.  The lining was silk and was so light you could probably squeeze it into a ball the size of your fist.  That lightness made it a little difficult to cut out.  I forgot the tip about cutting lightweight fabrics with paper.  I underlined the gown with silk organza to add substance. 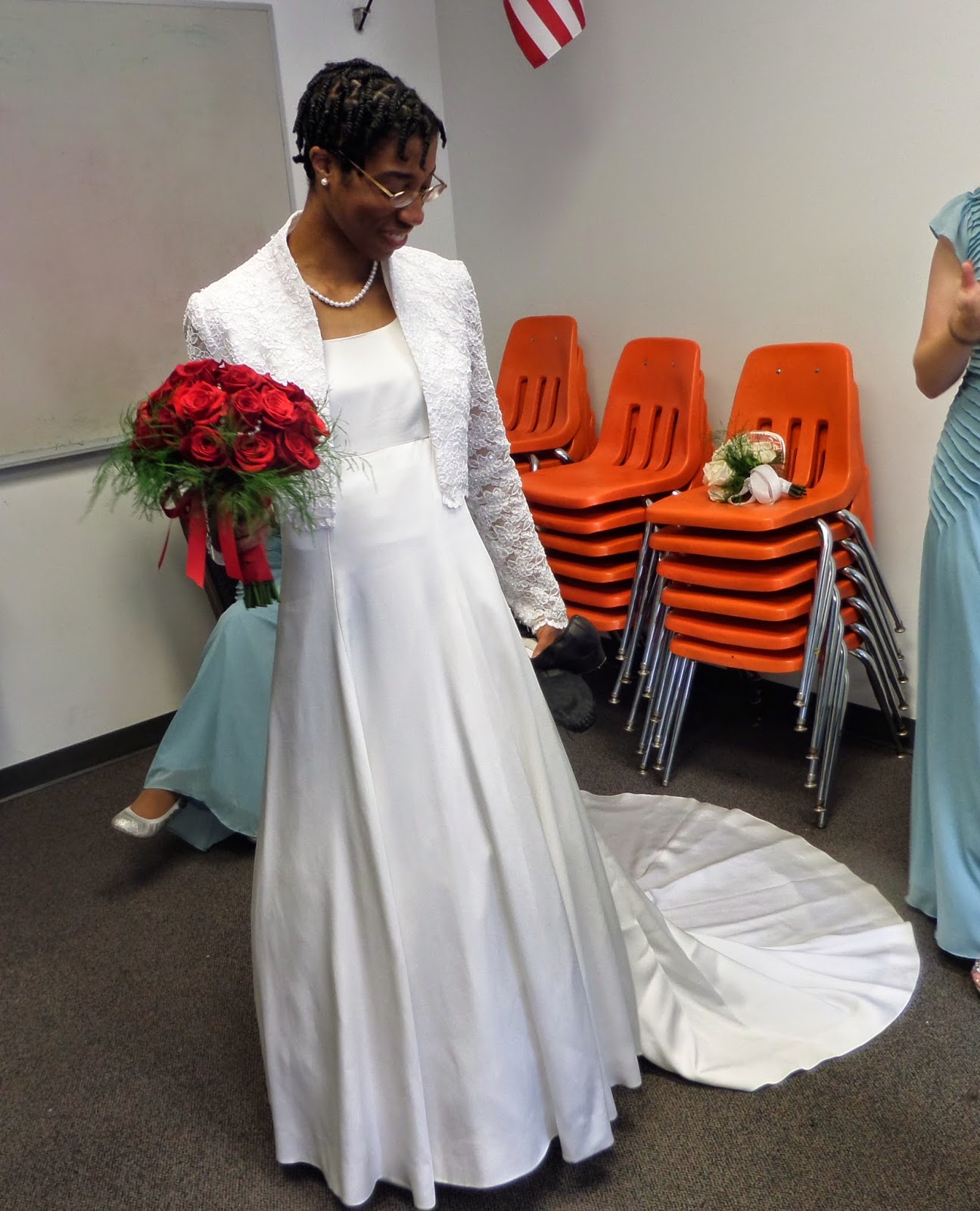 The dress had a train.  The bustling on which Linds and I disagreed (she would have settled for safety pins!) came out nicely.  I don't have a good picture of the back of the gown when it was bustled, but here's the back of the jacket: 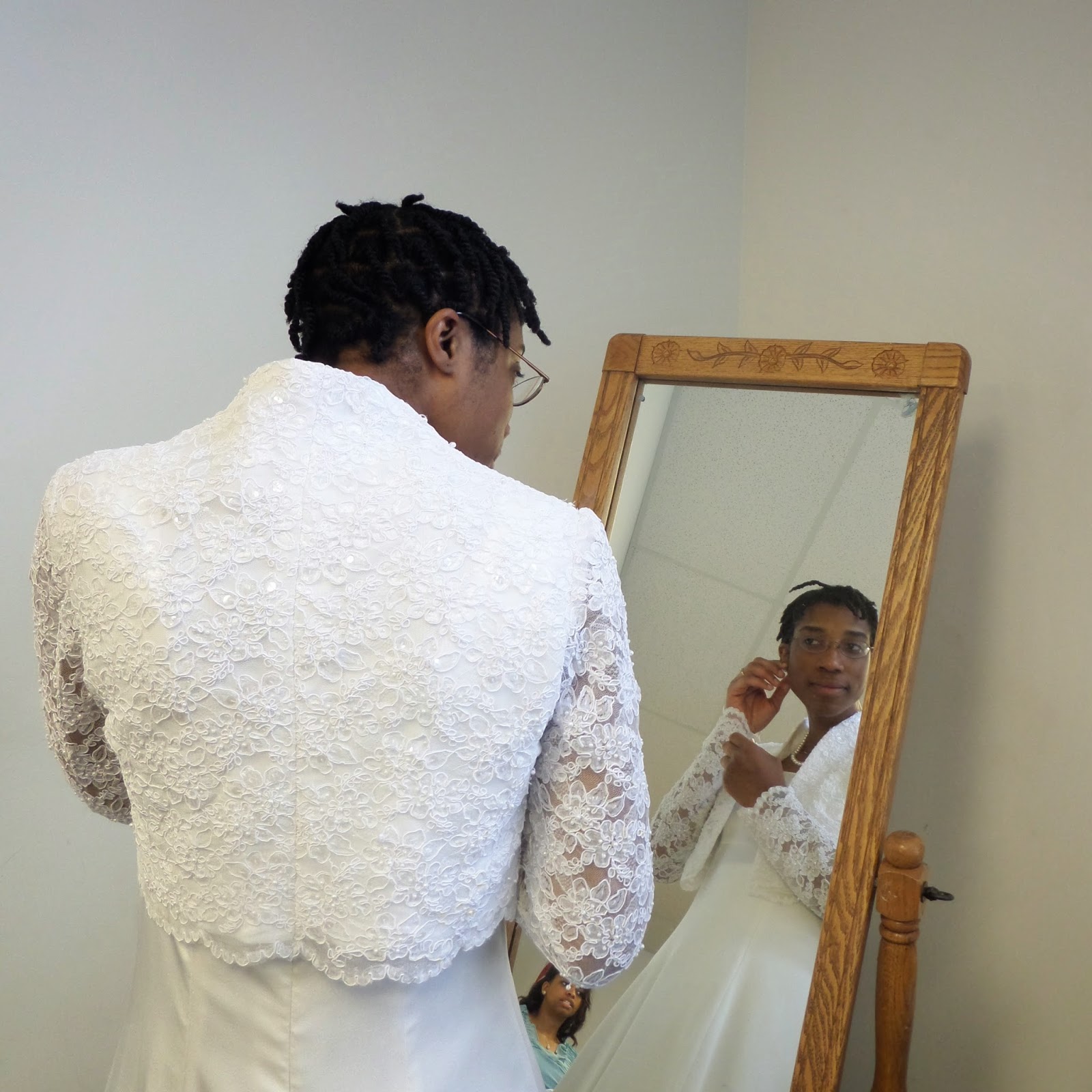 See?  As I've said in previous posts - very simple.  The beauty was in the embellished lace.

I ended up not wearing the dress I made for myself.  I sewed a Mother of the Bride dress, but it looked too dark and somber for a wedding in which I was the happy MOB, so I bought a dress instead.  A happy coincidence, which I didn't notice until my nephew's wife pointed it out, was that Linds and I both had scalloped lace on our jackets. 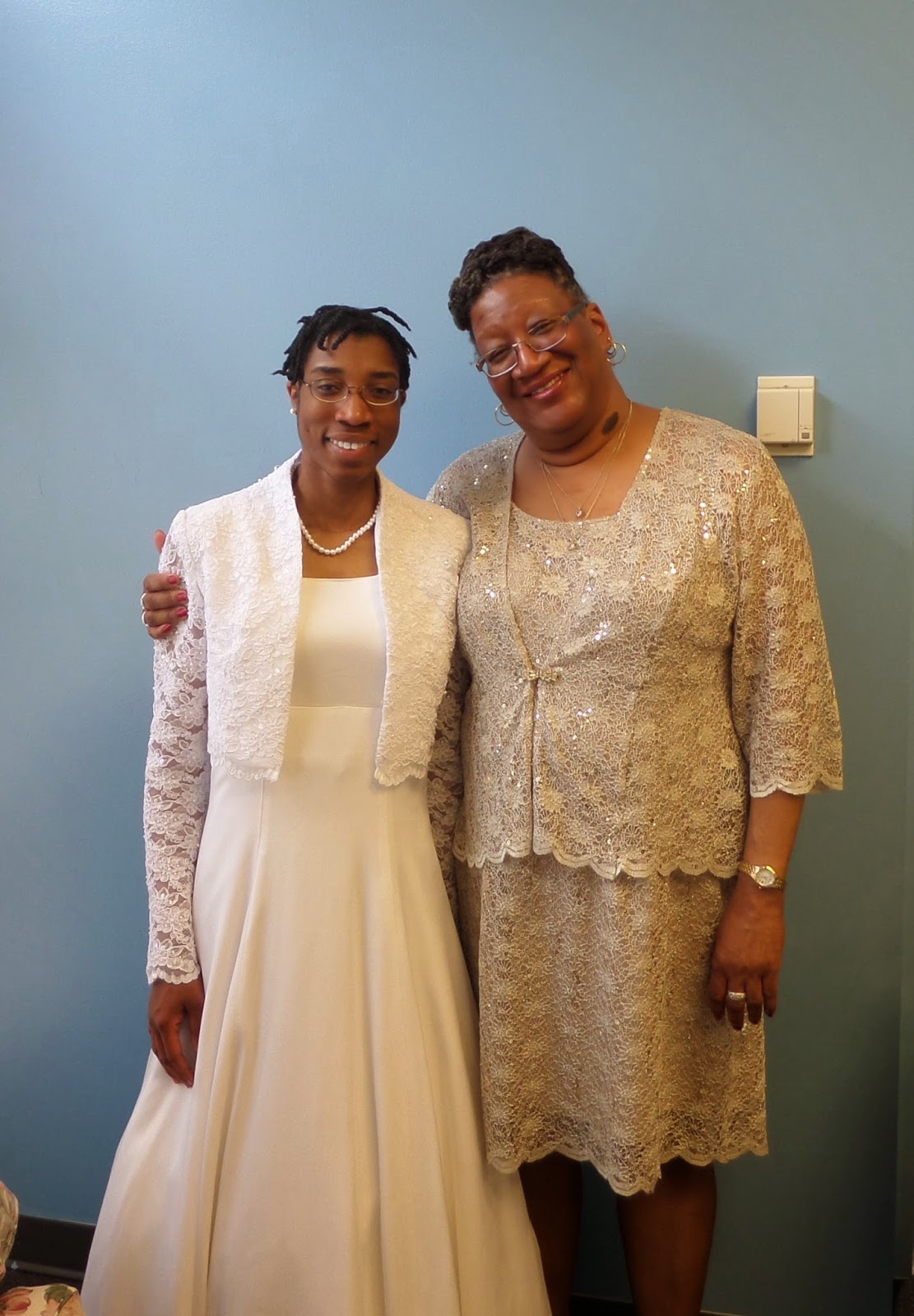 I didn't make the veil.  It was the veil her mother-in-law wore when she was married.  I thought that was a perfect sentimental touch. 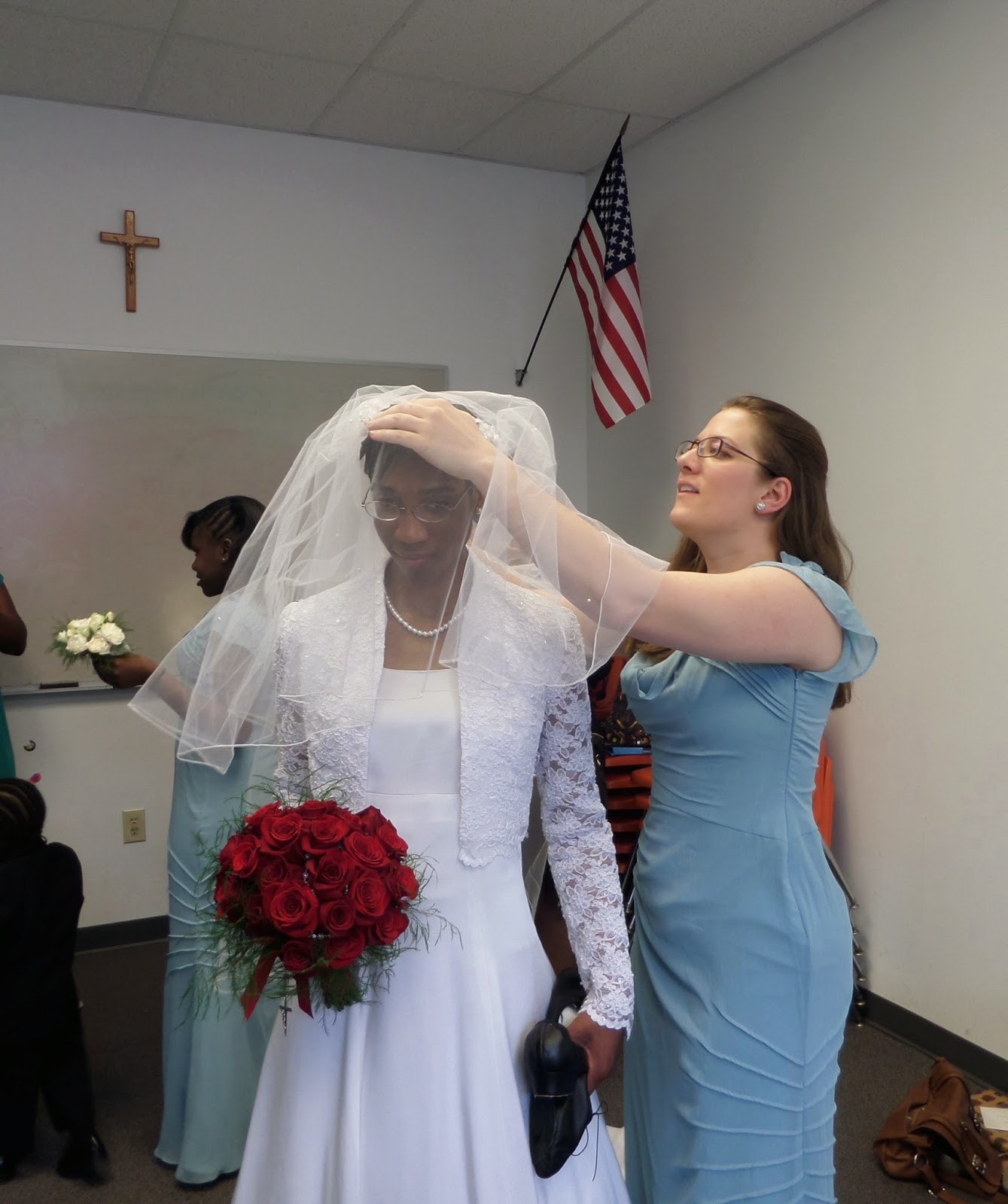 And seeing the dress in action made it even more beautiful in my humble MOB opinion. 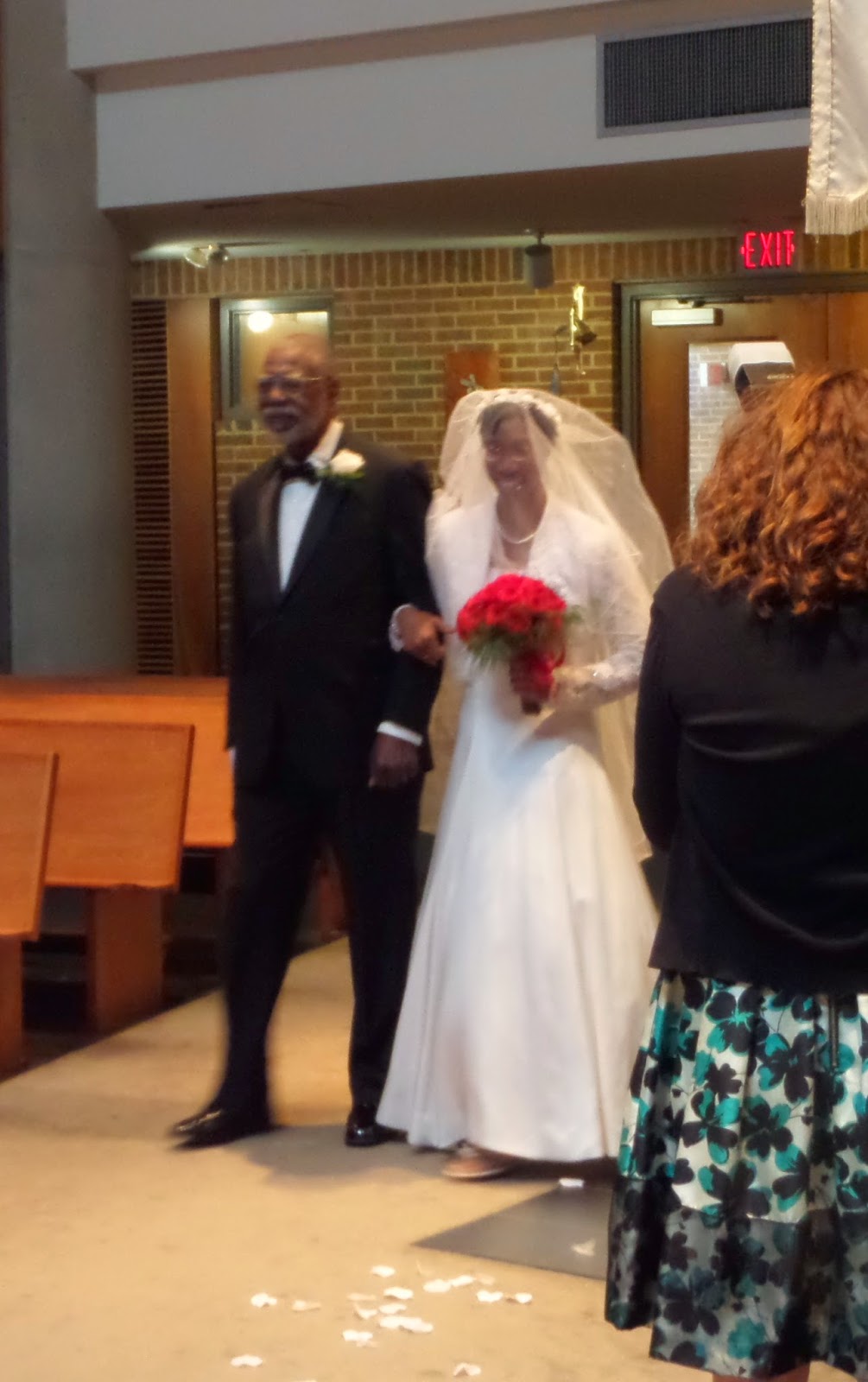 And here is the reason for all the stress, deadlines, train trip to New York for shopping, time spent ripping out beads and sequins, 11 yards of expensive but unused lace, travel between Richmond and Philadelphia and happy tears: 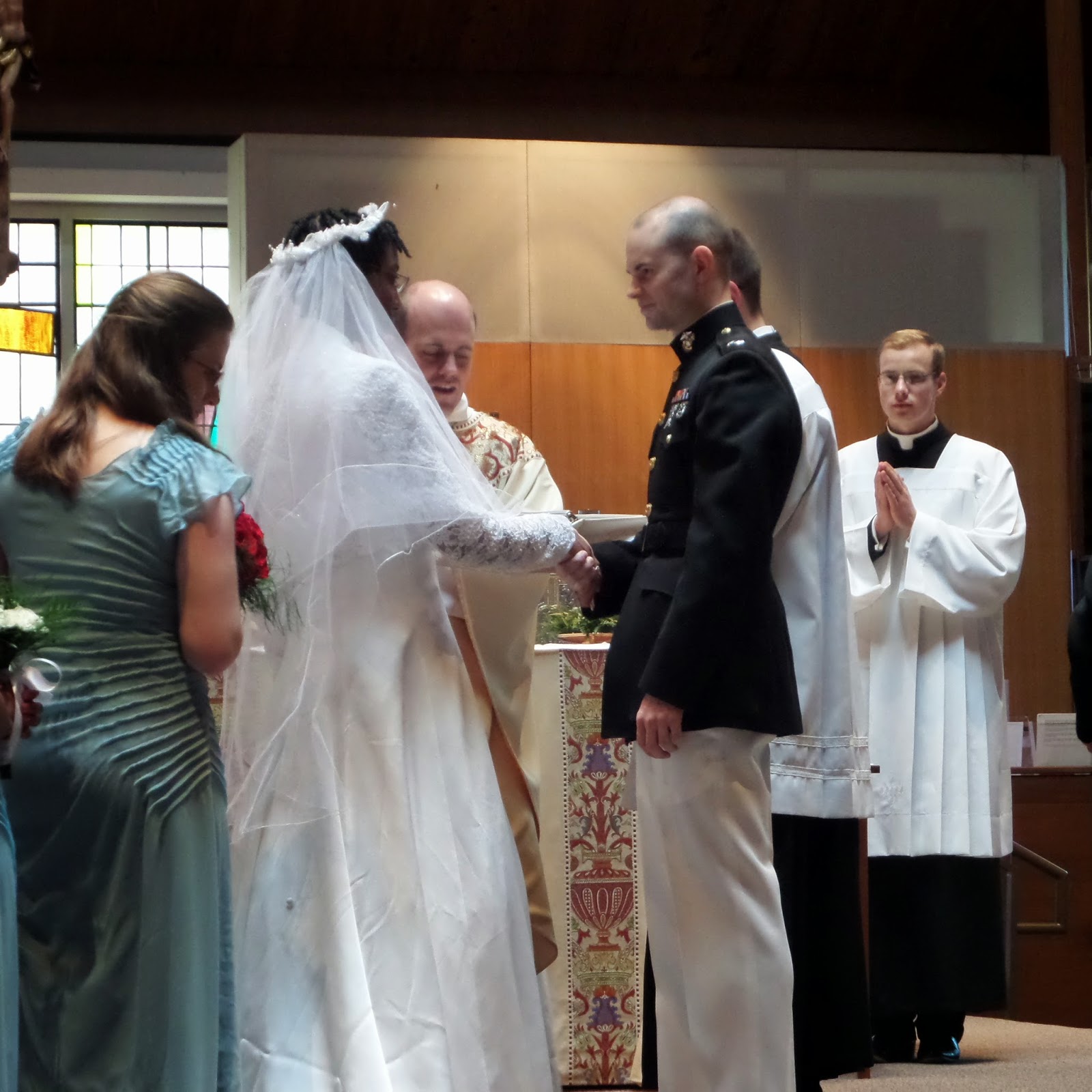 I wish I had a picture of Lindsey and Martin as they were presented, but my camera died just as my sister began her solo!  I was too caught up at that moment and I would have forgotten to take a picture anyway.

It was a Wonderful Wedding Weekend.  It was fantastic seeing old friends, new friends, old family and new family.  Everything went smoothly, I cried only at the appropriate moments.  And most importantly, I have a brand new son-in-law.

I found this picture on my phone.  I don't even remember taking it, but apparently I did! 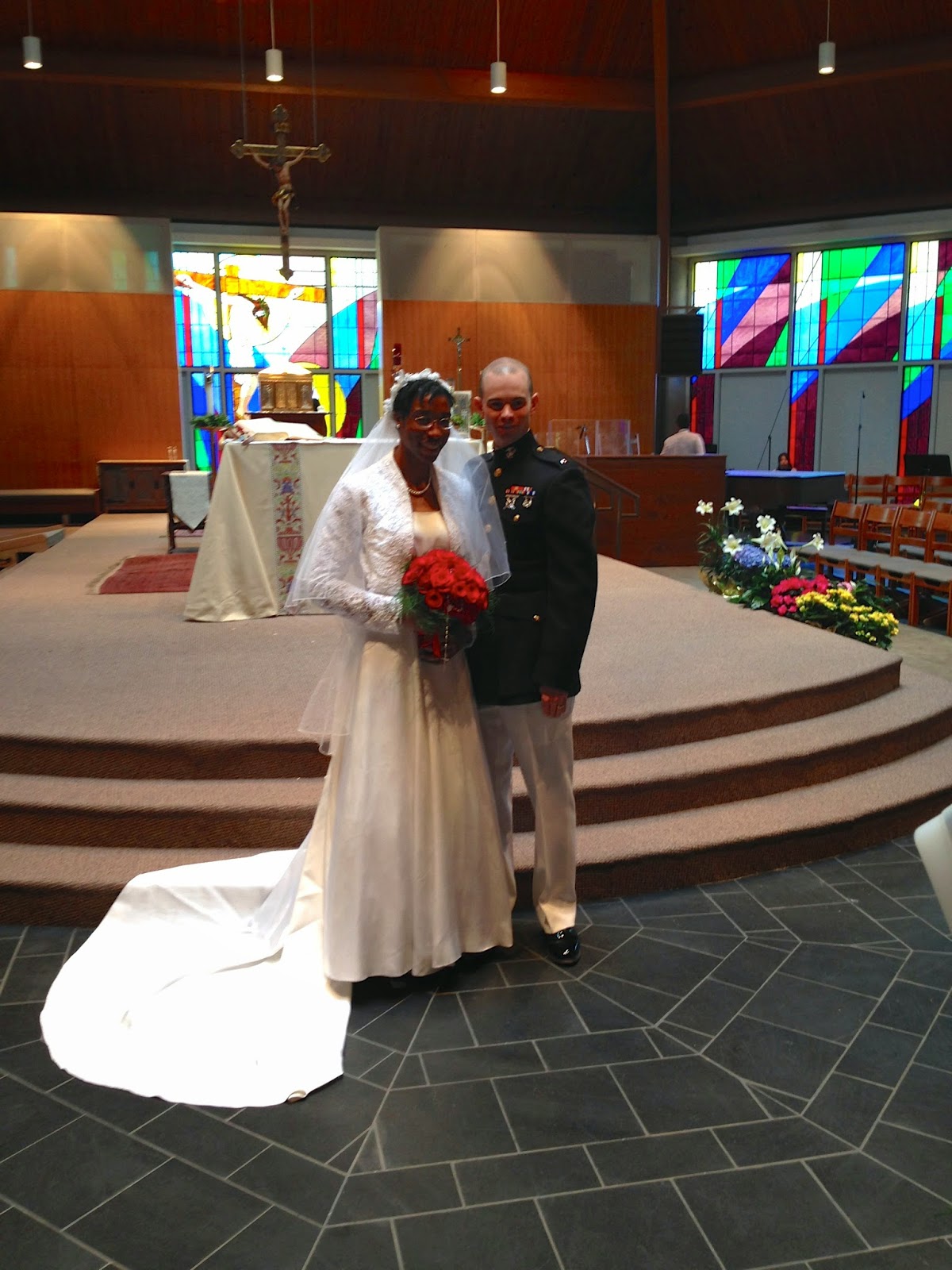 What did you particularly like or dislike about the pattern?
I like this dress because it is was a shirtwaist variation.

Fabric Used:
I used medium weight crepe-like polyester.  I might have had better results with a lighter weight fabric.

Construction:
This dress has a unique significance.  I used thread tracing and tailor's tacks exclusively – no tracing paper and tracing wheel – to mark the pieces.    I was tired of the poor performance of tracing paper.  The marks were either too  faint or they did not wash out.  Thread tracing and tailor's tacks took a little more time, but it wasn't as time-consuming as I thought it would be.

Whenever Burda patterns include an inset corner, the sewer is instructed to sew it in two steps rather than pivot at the corner.  I usually get pretty sharp corners this way, but I’m sure there is an easier way to do it.

I like self-fabric belts because a contrasting belt will call attention to the fact that I have no waist.  Apparently, no one makes belts out of self-fabric anymore.  I had a devil of a time finding a belt buckle.   I found the stiff belting interfacing, but most traditional buckles were larger than the 1 ¼” belting.  But, I “made it work” in a way that would have made Tim Gunn proud.  There is no elastic or overlap in the belt so it needed a little tweaking in order to fit.  I don't think I'll be using that method again if I ever need another belt. 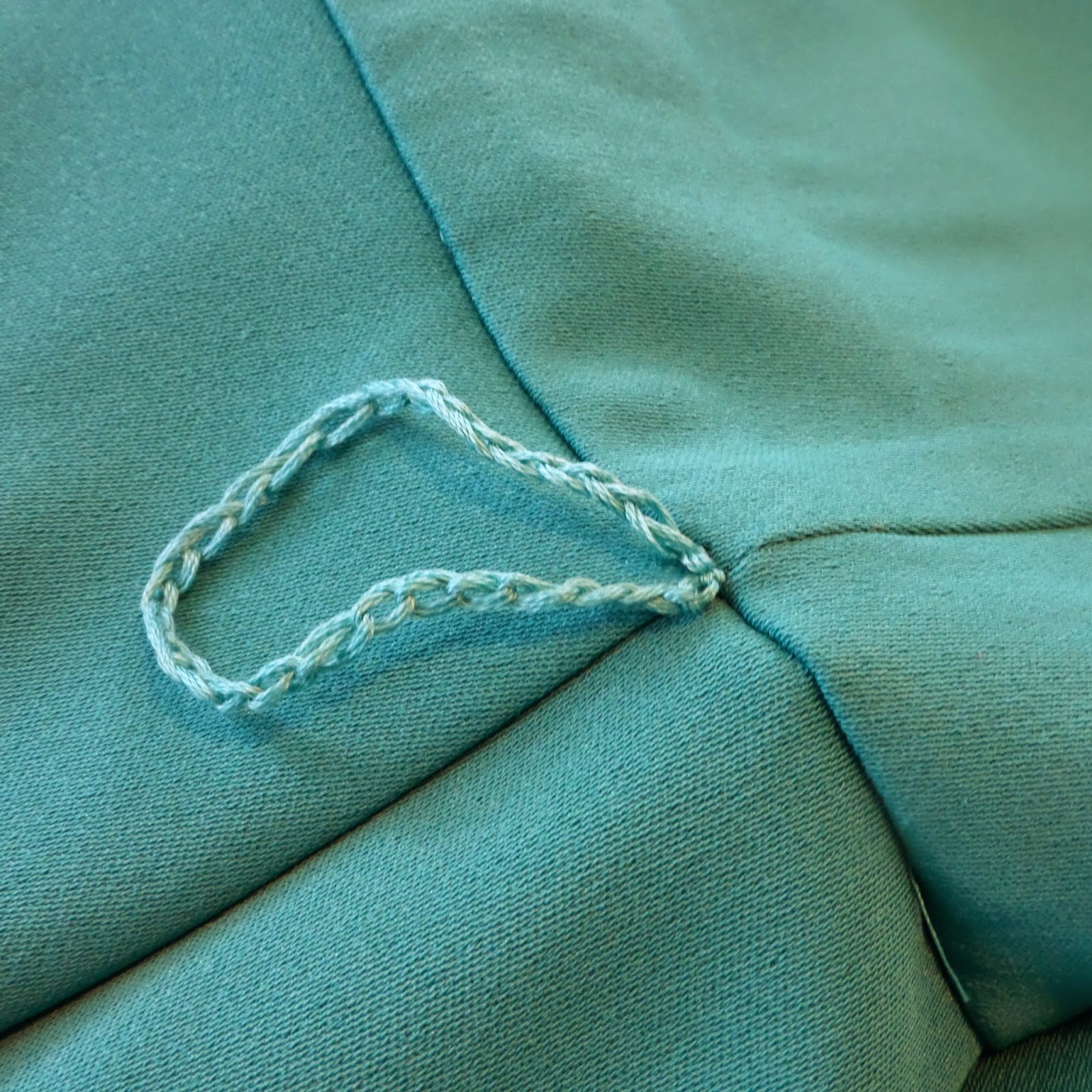 The instructions didn’t mention belt loops.   I need belt loops to keep the belt in the position where my waist would be if I had one.  I crocheted belt loops rather than make them from fabric.  I did this because I forgot to sew them on until the dress was finished and I believed crocheted loops were easier to retrofit.  I crocheted a chain leaving long ends at the beginning and end of the chain.  I threaded the ends through a needle and inserted both ends into the waist seam.  Finally, I tied the ends together on the inside and used Fray Check on the knot.

This dress has front pockets hidden in the folds of the pleats.  The pockets are positioned on the right side of the skirt and sewn in like a welt pocket without the welts.

Conclusion:
I'm still in the midst of my "I-don't-have-enough-dresses" phase.  I like the styling of the dress and I'm glad it went together easily.  I'm inspired to move on to the next dress in my queue. 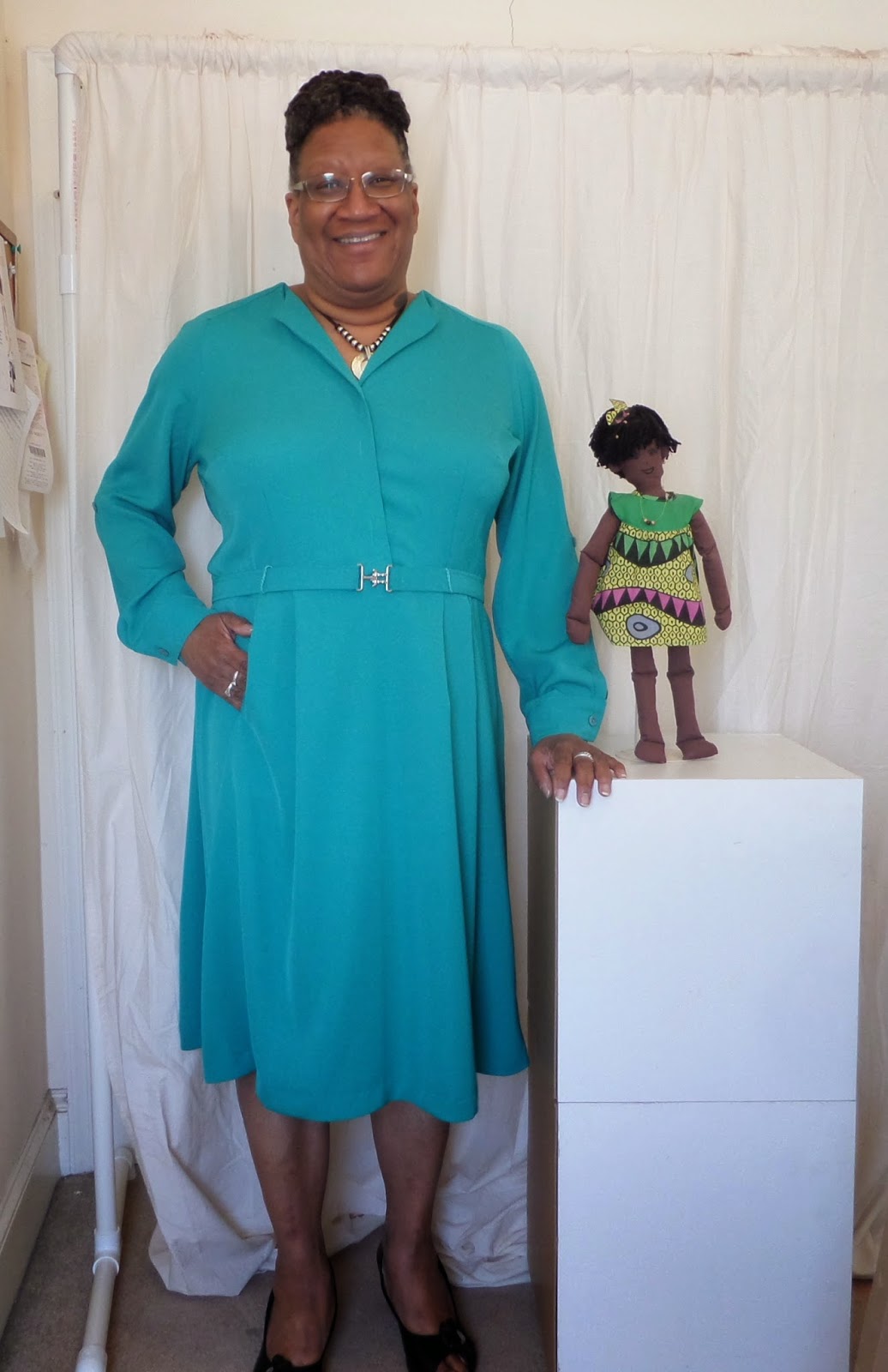 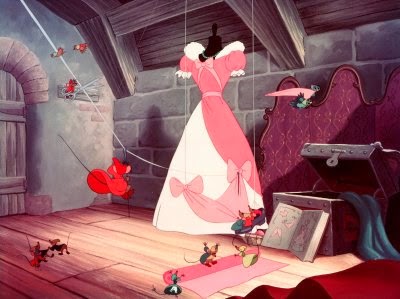 Whew!  It's finished with not a moment to spare.  The wedding is in three weeks. My daughter came home for the final fitting and is taking her wedding gown to her home in Virginia for the final cleaning and pressing.  (I won't show the completed dress before the wedding but I will show plenty of wedding pictures after the fact.)

My daughter chose a very plain design – we're talking Amish plain – but that turned out to be a good thing.  It made for very easy sewing.  But there were still challenges.  First, we had to change the original plan of making a simple dress with a lace overdress to add the drama.  The lace overdress stretched and grew like a bias fabric and was impossible to fit.  I now have yards of expensive lace and I don't know what to do with it.  (I know!  Save it for a christening gown!)

So, the design changed from a lace overdress to a lace jacket.  The jacket was a component of the original pattern anyway.  I bought more lace and made the jacket.  The lace was embellished with sequins and beads that had to be removed from the seam allowances before sewing and sewn back in when construction was finished.  Beads that were loosened had to be re-sewn.  Not fun.

The final challenge was bustling the gown.  To quote the panic-stricken Prissy from Gone With the Wind, "I don't know nothin' 'bout bustlin' no wedding gown!"  I pinned up the train as if I were going to over-bustle.  But in my mind, I'd planned to sew ribbons inside (blue for the "something blue") as if I were going to under- bustle.

Lindsey preferred the look of over bustling. She was concerned that the extra bulk under the dress would trip her up during the bride-groom first dance.  My concern was keeping the bustling invisible.  Since the skirt of the gown is so plain, making the bustling invisible was difficult. My daughter's suggestion was to use safety pins disguised with ribbon.  Her reasoning was, "If someone is petty enough to notice and  criticize ribbon wrapped safety pins, too bad!"  Well, I am petty enough and I couldn't accept her "too bad" attitude.  I strenuously objected to safety pins. We found a compromise.We ended up over bustling, much like the picture above.  I sewed bridal buttons and loops to the outside of the train.  It wasn't invisible, but neither was it obvious. 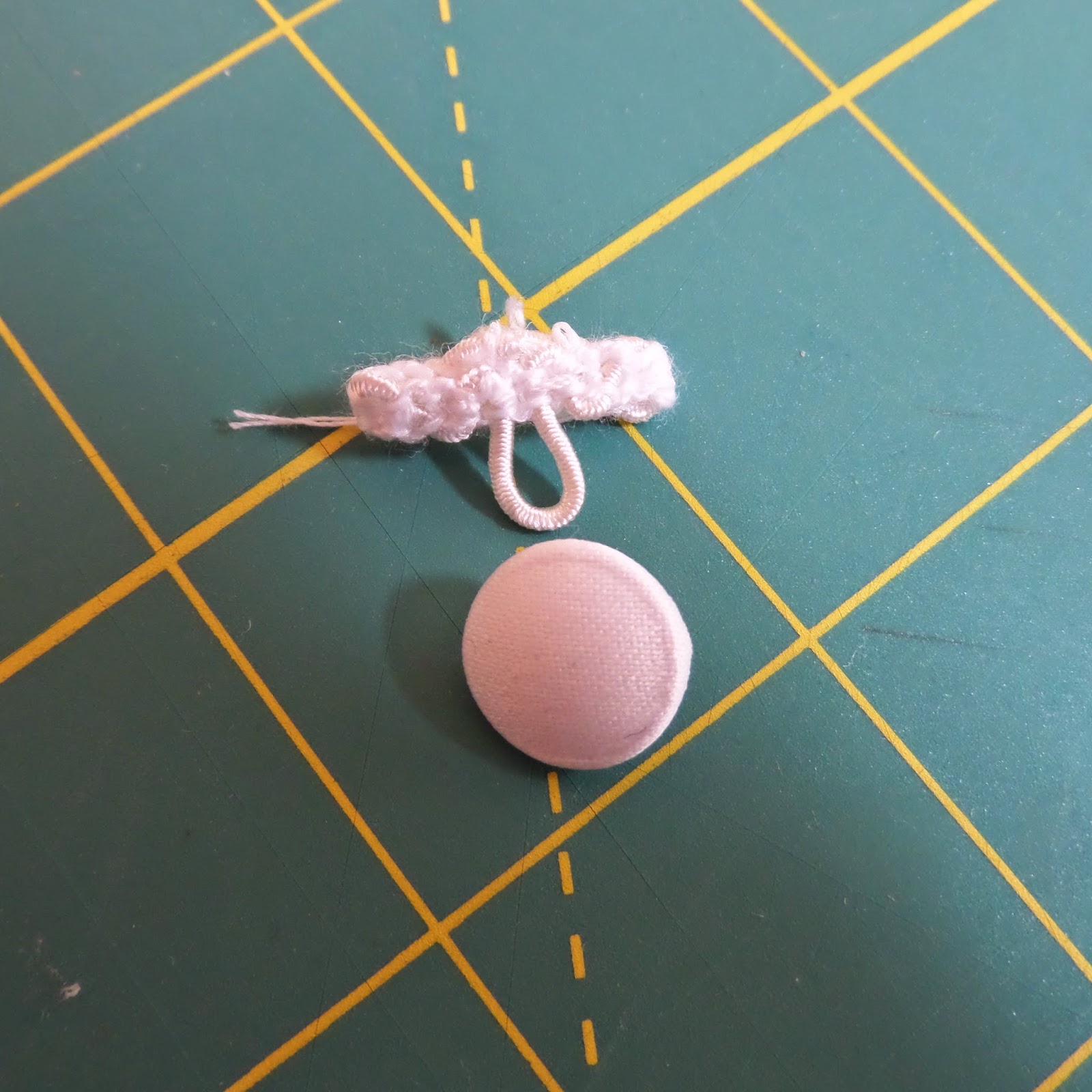 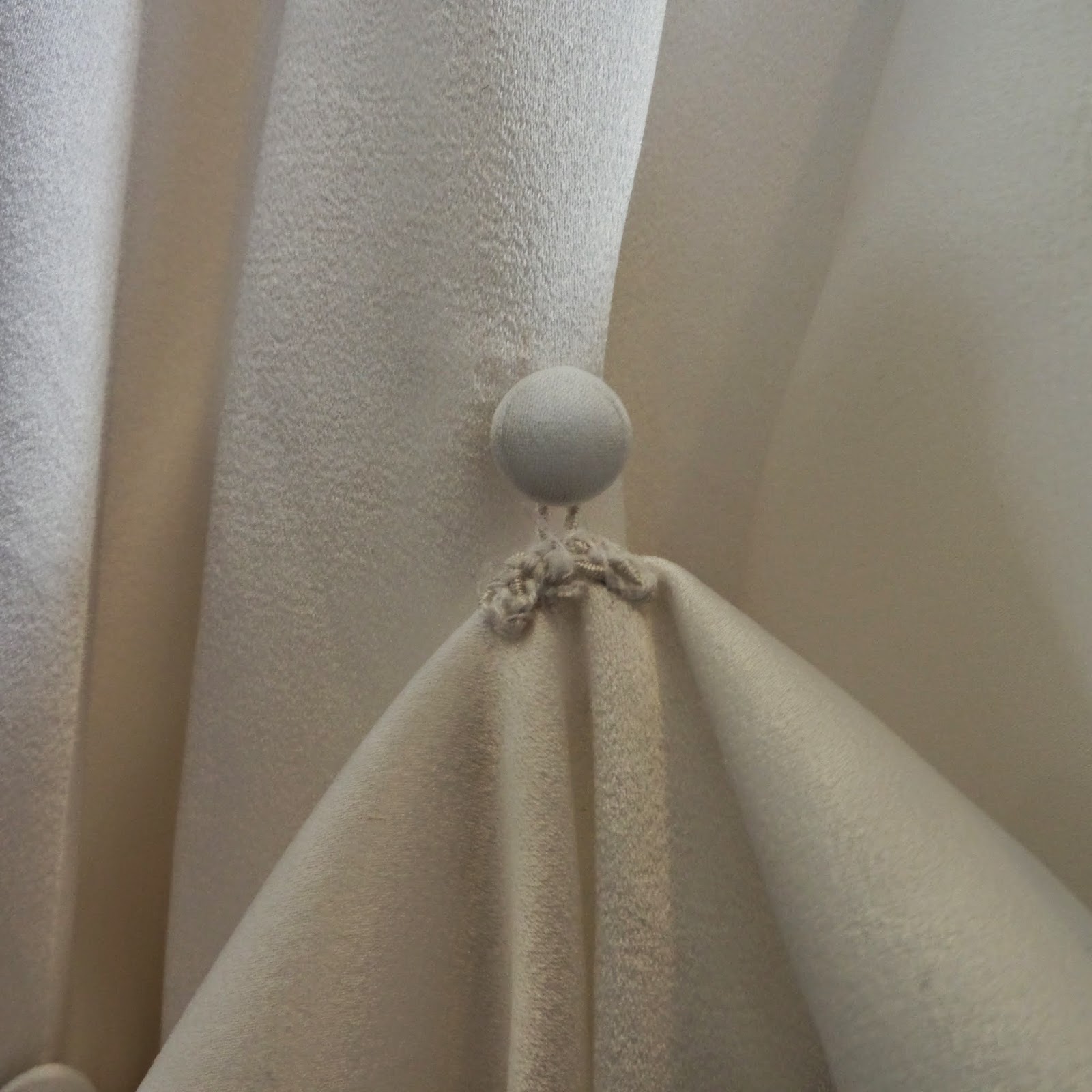 So, the wedding gown is finished and what have I learned?