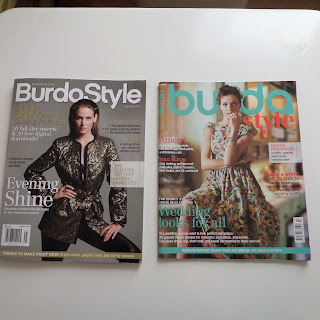 I only use the Plus sizes, so my comparison is limited. The plus collection in the US version was the collection from the March 2013 European/English issue.  I didn't check to see where the other patterns came from.  I was a little disappointed that the patterns were from seven months ago.  Maybe future issues will be more current.  Since magazines are put together so far in advance, that probably won't happen.

When I was a BurdaStyle neophyte, my biggest complaint about the European/English edition of BurdaStyle was the vague and awkwardly translated sewing instructions.  The US version promised clearer instructions.  I compared the instructions for jacket 138.

Now that I've had a chance to compare the two instructions, they don't seem to be all that different.  I don't know what I was complaining about all those years.

Some, but not all of the patterns are included in the US version.  Some have to be downloaded from BurdaStyle.com and … *gasp* … taped together!  I don't mind tracing, but taping and tracing might be too much for me.

This new US version is perfect for sewers who are curious about European pattern magazines.  I imagine a sewer buying a few issues of the US version, falling in love with the patterns and fit, and then switching to the unadulterated European/English version.  However, a sewer could get the BurdaStyle experience by sticking with the US version.

"The Great American Dress Project" might be a little hyperbolic.  A more accurate statement might be, "I've got three dresses in my queue."  While putting away summer clothes, I realized I just didn't like most of the dresses in my closet.  Some went into the trash and some will be donated.  I went into SWAP Mode and sat down with my Burda index and Vogue Fabric Store swatch catalogs. I selected four dresses I liked and found suitable fabric (I hope) for three of them.

After lengthy cogitation (I love that word!),  I concluded the problem with the discarded dresses was the poor fabric choices I'd made.   Choosing the best fabric for a project continues to be a problem for me.  The few dresses from my closet that I didn't throw out were made from solid or nearly solid fabrics.  So, with that in mind, I made the following choices:


Another dress in my queue is my Mother of the Bride Dress.  After an initial misstep in fabric selection, I have made the following assignment:


I hope I've made better fabric choices with these dresses.  I don't want to throw these dresses away next year when I do my closet change-over.
Posted by Elaray at 12:30 PM 6 comments: