Sewing at The Overlook Hotel

Remember Stephen King's "The Shining"?   The protagonist,  played by Jack Nicholson, goes crazy while snowed in and isolated at The Overlook Hotel.   It's beginning to feel a little like The Overlook Hotel around here.  After being snowed in for two days,  I decided to get rid of 18 back issues of Burda World of Fashion Magazine (Jun. 2004 - Dec. 2005).  That decision made me wonder about my sanity. 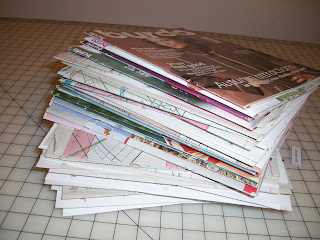 As I ran out of storage space,  I wondered how I was going to continue to store my growing collection of  BWOFs.  I moved them from the bookcase to the closet, but that was a temporary fix.  The issue had to be confronted.  The solution came to me in a flash – "It's time to get rid of those old BWOFs" – and I acted on it before I could change my mind.

I don't want to be seen on "Clean House" or those other shows about pathological hoarders.  As I removed pages from my index binder and the magazines from the expanding files, I realized how few of the patterns I'd actually sewn.  I didn't want to bother selling them on eBay, Craigslist or Pattern Review. That would just be continuing to feed the obsession.  It was time for drastic measures.  I didn't get rid of any traced patterns from those old issues (yet),  just the  excess magazines and pattern sheets.  It was liberating.  I've decided to limit my Burda collection to 5 years so I will still have plenty of old issues to look through.  Now that I've done this initial purge, it won't be so difficult the next time.

I know being housebound played a big part in this decision, but I don't regret it.  Still,  the sooner I get out of the house, the better.

UPDATE!
KoLa RoTh's comment has given me an idea.  This offer is perfect for people who have never tried Burda and would like to.  I will give away the magazines I planned to throw away.  These are not complete issues.  They are only the instructions and the pattern sheets – not the glossy magazine section.  However, the instructions include technical line drawings of each pattern so you can see what the garments look like.  The patterns are old – July 2004 to December 2005.  You can request a specific issue, but I may or may not be able to honor your request.   I will randomly select an issue while supplies last.  This offer is First Come, First Served.

If you can live with all of these stipulations, send me an email with your mailing address.  My email is given in the sidebar.  As KoLa RoTh said, this is a good opportunity to try Burda Magazine patterns for the first time.  The first 18 Burda Newbies who respond get the patterns.
Posted by Elaray at 12:00 PM 4 comments: 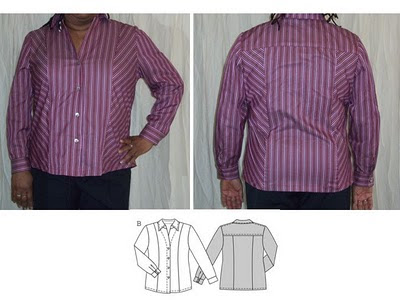 Pattern Description:
Long sleeved blouse with front and back panels.  Princess seams originate at the shoulder in the front and the yoke in the back.  The pattern also includes a camisole and a longer shirt.

What did you particularly like or dislike about the pattern?
In this blouse, I wanted to do something with the stripes.  This pattern, with it's front and back panels was perfectly suited for what I had in mind.  I accosted a co-worker when I saw her striped blouse with some sections cut on the bias.  I made a note on the direction of the stripes and duplicated it on my blouse.

Fabric Used:
I used a cotton shirting for this blouse.  I took a drive to Fabric Mart's brick and mortar store and bought this fabric and fabric for the coordinating pants.

Would you sew it again? Would you recommend it to others?
I've sewn this blouse one or two times before and I'll probably sew it again.  It's a classic long sleeved design.

Conclusion:
I enjoyed manipulating the stripes in this blouse.  It was a simple change that added a little visual interest to an otherwise plain blouse. 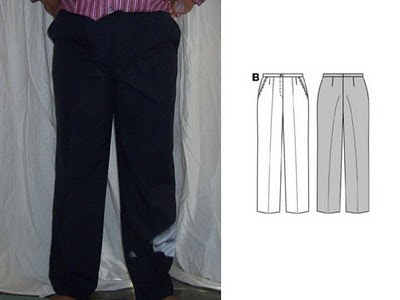 What did you particularly like or dislike about the pattern?
Most of my pants are a variation on this theme.

Pattern alterations or any design changes you made:
I used petersham to face the waistband.  I want to make a petersham faced waistband part of my arsenal and this attempt was more successful than my last attempt.  The  inside looks neater, but I still need to work on the technique a little more.  I'm not sure if I'll continue to use it.

Would you sew it again? Would you recommend it to others?
This has become a TNT pants pattern.  And to think, I didn't used to have TNTs – now I have several. 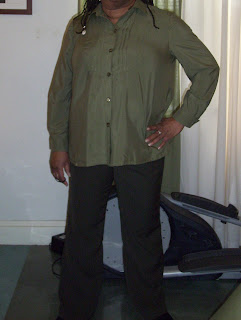 While making this outfit,  I had renewed determination to do the best job I could.

No shortcuts!
"No shortcuts" does not mean "no problems".  There still were glitches – some of them major.

Blouse:  Burda 7882
I bought this pattern a year or two ago expressly to alter it.  I needed practice restyling patterns so I turned a bib front blouse into an ordinary button front blouse.  (Kinda backwards.  Why would I alter a pattern to omit a nice design detail and make it more boring?) Anyway, this time I left well enough alone and made the blouse with the pin tucked bib.  Since I was committed to the "no shortcut" process,  I thread traced the fold lines for the tucks and pressed and sewed them one at a time using my edge stitch foot.  The extra effort was minimal and I was happy with the results.  I obsessed about carefully considered the size of the buttons on the blouse. They seemed too large to me.  Every time I looked at the blouse, my eyes were immediately drawn to  buttons that looked big enough for a clown costume.  I solicited opinions on Pattern Review and Stitcher's Guild. No one agreed with me.  Apparently, I'm the only person obsessed enough to worry about the size of the buttons.  Most people thought I was nuts, but were too kind to say so directly.  Okay.  I accept that.

Pants: BPF FW-09-404
The pants were a disaster.  It's hidden by the blouse, but I could barely fasten the pants around my belly.  I'll probably never wear them and that's a shame because I love the fabric.  In an attempt to upgrade the finished pants, I used petersham to face the waistband as recommended in Power Sewing Step by Step  (Betzina, 2002) and Making Trousers for Men & Women (Coffin, 2009).   Call me crazy, but I think using the petersham made the waistband smaller.   I never had this problem before I used petersham in the waistband.
Betzina  recommended shaping the petersham before using it as a waistband facing.  This, she says, allows the stretched edge to fit over the tummy.  I didn't do that, and sure enough, the waist didn't fit over my tummy.  (That's my story and I'm sticking to it.)  I've made these pants in the past and I'm pretty sure they fit.  Truth is, I made  changes in pocket construction that could have affected the fit.  And could the problem possibly be my tummy?   (See that elliptical machine behind me in the picture?  I'd better start using it more!)  I'll make some alterations to give me more room, but these pants may end up in Wadderville.  What disappoints me most is now I'm less enamored of the petersham waist facing treatment. That bothers me because I wanted to use the method to add some class to my pants.  I can work out the glitches in the petersham waist band by doing some experimenting on some throw-away fabric.

In spite of the disastrous results on the pants, I'm still committed to "No Shortcut" sewing and I'm determined to keep trying to make better garments.   I can get cheaply made clothes anywhere.  I don't have to spend time making them myself.
Posted by Elaray at 8:00 AM 7 comments:

How I Spent My Christmas Vacation

We had a wonderful Christmas with my youngest sister in Charlotte, NC.  Charlotte had only 3 or 4 inches of snow on the day after Christmas and it stuck only to the lawns.  Not so in Philadelphia, which had it's first blizzard of the season.  Since I hate snow with a passion that burns hotter than the fires of hell,  I decided we should stay and experience Charlotte's civilized snowfall for two extra days.  Why come home and deal with the immediate aftermath of a blizzard?  It would have killed all the warm, fuzzy holiday feelings from the aftermath of Christmas.  Instead, I indulged myself with sewing related activities even though I was far from my sewing room.

Shopping for Fabric
My sister and her husband are expecting a son in Spring and I agreed to sew the baby room stuff!  On Christmas Eve, we went to Mary Jo's in Gastonia, NC to search for the fabric.  Mary Jo's is huge!!!!   Hard to believe, but even with  the tons of fabric in the store,  Little Sis didn't find anything she really loved.  I found a piece suitable for my mini-SWAP, so I was happy.  My eight-year-old 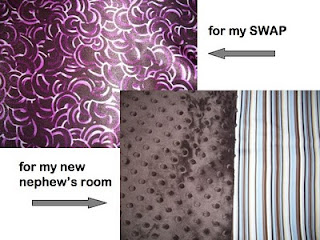 niece found a piece of minkee to use as a TV-watching-cuddle-up blanket, so she was happy.  Only Little Sis was disappointed.  Two days later while she was at work,  I went on a solo reconnaissance mission to Sew Much Fun in Charlotte and sent a few pictures of possibilities to her cell phone.  Still, nothing.  I can't go into a fabric store and not buy anything, so I bought a package of Wonder Tape as seen on the Sewing Toolbox DVD (see below) and two packs of charm squares (20% off!) for a future quilting project. Our last chance was Hobby Lobby.  There are no Hobby Lobbies in my area and I was curious about them.  For me, it's too much of a craft/decorating store and not enough of a fabric store.  But that wouldn't stop me from shopping there if I had one.  Little Sis found just what she wanted, but there wasn't enough yardage on the bolt.  Luckily, she was able to order the amount she needed.  In addition to the stripe pictured, she ordered dots in the same colorway.   The brown minkee is for the crib quilt.  Mission accomplished. 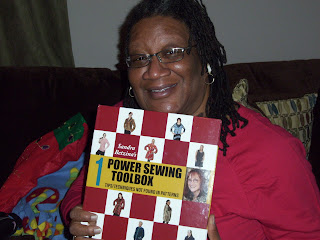 I got both volumes of Sandra Betzina's Power Sewing Toolbox for Christmas.   The books are full of just what the subtitle promises:  "tips/techniques not found in patterns".  I'm guessing the content is from the Power Sewing webcasts available by subscription on the Power Sewing website.  (I am not a subscriber.)   The books are very capably reviewed by Sharon on Adventures from the Sewing Studio.  I have nothing to add except I think the books are definitely a "must have."  Having the books and accompanying DVDs  made up for being so far away from my sewing machine.

If I had been snowed-in at home, I would have spent long days in the sewing room and that would have been wonderful.  But I didn't feel cheated.   There was lots of fabric shopping and I had two new sewing books to read.  Best of all, I got to spend Christmas with a small part of my extended family which made this Christmas more like the Christmases I remember.
Posted by Elaray at 8:00 AM 9 comments: