Bringing this outfit to fruition was like a birthing a 12 pound baby after a 36 hour labor.  The biggest obstacle was my OCD about matching fabrics.  Then I took a little quilting detour in the middle of the project.  But, it's finished.

I don't remember where I bought the fabric for the pants, but if I'd known it would be so hard to match, I would have left it in the store.  The fabric is woven with dark olive green and brown threads (and even a little black) so it doesn't know if it wants to be green or brown.  If I chose brown as a coordinating fabric, the fabric looked green and vice versa.  I took the swatch to three different fabric stores hoping to find a coordinating fabric for a blouse.  I'm not entirely happy with my final choice but I just refused to worry about it anymore.  Lesson learned:  Get over this unhealthy "fabrics have to match" obsession!

I added a partial lining to the front of the pants.  This technique was used on another Burda pants pattern I made recently and I like the results.  I traced the pants front, including the hip yoke section, to just below the knee.  After the pockets were finished, I basted the lining to the pants front and treated the two layers as one.  Technically, the technique I used is underlining, not lining.

From Threads website:
Underlining vs. lining
Let's clear up one point first: lining and underlining a garment are two different procedures, and depending on their purpose, one or both can be used in a single piece of clothing. Usually cut from a slippery fabric, lining is attached only at the garment's waistband or neck, and sometimes its hem -- otherwise, it hangs free in the garment. It's generally used to give a finished look to the inside of the garment, prevent seams from raveling, reduce wrinkling, help conceal some figure faults, and make a garment easier to slip on and off.

Underlining, on the other hand, is cut from the same pattern pieces as the fashion fabric and is attached before construction begins. Then, as the garment is constructed, the underlining and fashion fabric are handled as a single unit. Most often, underlining is cut from fine cotton batiste, light- to medium-weight cotton broadcloth, or silk organza. But a variety of other materials can also be used to underline a fashion fabric.

I bought three different pieces of fabric to make a top for the pants.  The more I worked with the first piece, a green silk, the less I liked it with the pants fabric.  It wasn't the right green.  So I set it aside, hoping it wouldn't morph into a UFO, and I ordered a tan knit. I didn't like that either.  I finally found a dark olive peachskin at JoAnn Fabrics & Crafts.

For some unknown reason, I wanted to make and use piping.  This blouse called for pleated trim around the placket and cuffs.  I substituted the piping.  I've never been overly successful making bias strips by the sew-a-twisted-tube method.  I found an easier method that requires folding a square or rectangle of fabric.  Another little tip:  The Bernina bulky overlock foot #12 is recommended for making piping.  However, my piping was much thinner than the channel in the foot so the foot wasn't securely holding the filler cord in position.  I used the three-groove pintuck foot #30 instead and it worked beautifully.

I used polyester peachskin to make this blouse. I know I vowed never to sew polyester again, but promises are made to be broken, right?  I was more concerned about the color than anything else.

Let There Be Light!

One month ago, if anyone asked me if I had enough light in my sewing room, I would have said "Yes, of course".  And I would have been wrong.

I used to have one lamp clamped to a bookcase that was used to light either the cutting table or the ironing board.  I also had a floor lamp that stood between the sewing machine and serger and I shifted that lamp between machines as needed.  I recently bought two separate lamps for the cutting area and ironing board. The arrangement worked so well I applied the same logic to the sewing area.   I bought two more lamps, one for the serger and one for the sewing machine, and mounted them on the wall so they directly lit the feed dogs.  Previously, when the floor lamp was positioned for the serger, the light source was on the right and a shadow was cast directly on the sewing area.  This new arrangement eliminated that problem shadow. 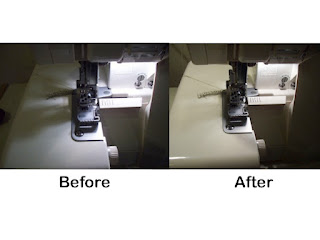 The difference was not as striking on the sewing machine. Apparently, Bernina's CFL sewing light is more efficient that Baby Lock's incandescent bulb. 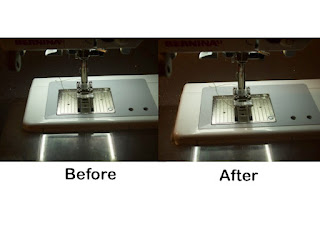 I encourage every sewer to critically examine the lighting in their sewing space.  Then run, don't walk and buy more light.  Your eyes will thank you!
Posted by Elaray at 11:07 AM 3 comments:

It seems like a long time since I've sewn a coordinating top and bottom.  I haven't been able to find coordinating pieces of fabrics when shopping.  The colors are quite a bit brighter than I'm used to wearing.  I hope I have the guts to wear it.

I like this skirt a lot, but it highlights a problem I'm having with Burda Magazine.  This skirt came from a 2007 issue – when it was called Burda World of Fashion.   I really don't have the space to store old Burdas. But I'm still finding things I want to make in older issues so I don't want to get rid of them either.  I've already given away 2005 and 2006 and I'm afraid to get rid of any more.  This issue was in the next batch to be disposed of.  How am I supposed declutter when my clutter is still useful?  I guess I'd better find some way to store them.

I'm trying to incorporate techniques into my sewing that increase the value of my garments.  Mismatched yoke seams at the zipper scream "home made" not "custom made".   This technique has its basis in Claire Shaeffer's "keying a zipper" technique. 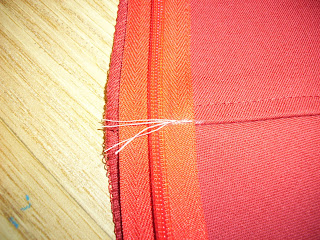 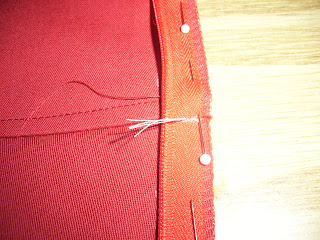 I matched the basting to the seam on the other side before sewing that side of the zipper. 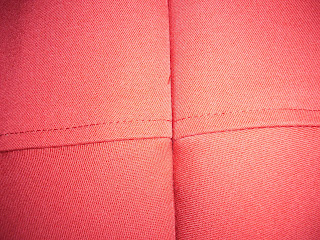 When the other side was sewn, the seams matched nearly perfectly.

It was really just that easy!  I don't know why I never used this technique before. 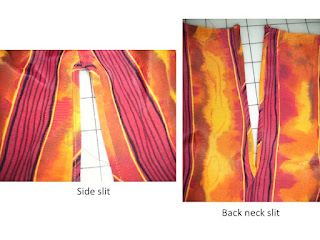 Leave it to Burda to make things difficult.  Rather than faced or turned-under slits, Burda has bound slits!  Didn't I just say, not three or four paragraphs ago, I wanted to increase the value of my sewn garments?  Any old pattern company can have faced or turned-under slits.  Even though I seriously considered simplifying the slits, I went ahead and bound them the way Burda said I should.

This blouse has lots of gathering.  I used my new favorite method – pulling up the bobbin thread, pulling out enough bobbin and needle thread to cover the length of the gathered area and zigzagging over the threads.  This makes gathering easier because the threads are stable and secure.  I would have preferred more match points for attaching the neckband to the neckline.

If I'd made a muslin, I would have seen the sleeve bands could have been a little shorter so they fit tighter around my arm.  Oh, well.  Maybe next time.