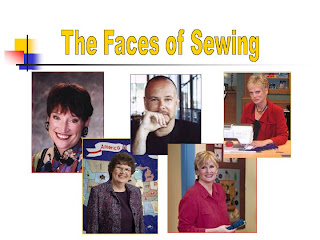 I wish there were more sewing shows on TV. In my area, I have the choice of watching Sewing with Nancy, Love of Quilting and America Sews. These three shows are broadcast on PBS beginning at 6:00 AM on Saturday. Who wants to get up at 6:00 AM on a Saturday - even to watch a sewing TV show? Thankfully, I have DVR! I watch theses shows (well, not America Sews) because they are the only games in town. I really miss Sew Much More with Susan Khalje and Sew Perfect with Sandra Betzina. These shows featured primarily garment sewing and were geared toward an experienced sewer. Sewing with Nancy has been on TV for 25 years! I guess she's covered just about everything there is to cover in the realm of sewing.

Why is it we have 100's of cable TV channels, many of them programming for specific niche audiences, yet so few sewing shows? (Project Runway doesn't really count.) Seems to me, DIY or HGTV or even the Style Network are perfect venues for sewing shows. We can watch people play poker or fish on TV, yet we can't learn to improve our welt pockets! Where is the justice in that? Maybe I'm living in the past. Maybe there really isn't a market for sewing on TV anymore. When a programmer schedules a show at 6:00 o'clock on a Saturday morning, he doesn't expect a lot of viewers. Web TV and other digital formats may be the future, but I miss curling up on the couch with a cup of tea and learning something about sewing. Sandra Betzina and Alex Anderson have moved their shows to the internet. David Page Coffin has written a book on making pants with an accompanying DVD-ROM. But, it's hard to curl up and get comfortable in front of a monitor at a desk. If I insist on watching sewing shows on a TV screen, DVDs are an option, so I've begun to buy DVD's to satisfy my Sewing on TV addiction.

Which brings me to my next complaint – where are the sewing celebrities of the future? I think Kenneth King would have a great sewing show! I've seen him as a guest on Sew Much More and I read about the class LindsayT took with him. His designs are a little too "over the top" for my taste, but the techniques demonstrated (and featured in his book, Cool Couture) were fantastic. Does anyone have information on sewing TV shows they'd like to share?
Posted by Elaray at 9:00 PM