I Can't Resist a Good Sale

I went to JoAnn to buy this …

and ended up buying this … 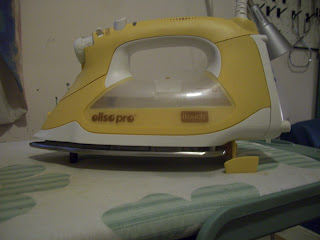 At least they're both yellow.

I was first interested in Oliso's Pro Smart Iron because of the feet that raise the soleplate. I love a good gimmick. Then I learned the iron has a "thirty minute extended shut off for sewers and quilters".  The thirty minute shut-off feature was icing on the cake.  I vowed to buy the iron the next time they were on sale at JoAnn.

So …… I found myself at JoAnn during a storewide sale.  I went there for yellow thread and buttons.  Not the most efficient use of non-renewable fossil fuel, I admit, but I gotta sew. The buttons were in the same aisle as irons and the irons were 20% off.  I had to buy it!  I had to.  In addition to the 20% discount, I got an additional 15% off with my teacher's discount card.  Total savings – $63.99!  The iron I'm replacing cost less than the $63.00 I saved.  I don't often indulge myself like this so I easily justified the extravagance.