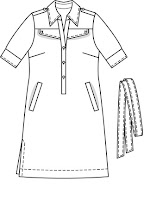 Finally, I've reached BS 02-10-138 in my queue.  I liked this dress when I first saw it in preview in January.  I found the perfect fabric at JoMar in March.  And now, it's finally time to sew it! It has dozens of  fourteen pieces – shoulder tabs, bias bindings, flaps – and tracing it will be a pain.  But if I like Burda Style's design details, then I have no choice but to trace them.


June 10
I've been working on this dress early in the morning before for work.  I used this pattern before to make a blouse and I had a problem with the front band and opening.  The front was placed on the fold and there wasn't enough room between the placket seamline and the fold for a 5/8" seam allowance.  I didn't read the directions carefully enough the first time.  This time I realized the seam allowances are 3/8", not the usual 5/8".  Very sneaky, Burda Style!  Of course I realized this after I traced a 5/8" seam allowance onto all of the pieces.  I solved the problem by changing the seam allowances to 3/8" only on the front band pieces and the placket openings including the front yoke!  I kept the rest of the seam allowances at 5/8".  Everything is cut out and marked.  After cutting and applying the interfacing, I'll be ready to sew! 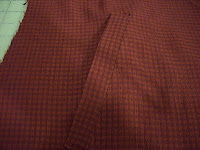 June 11
I'm pleading temporary insanity.  For a moment, I actually believed I could use BS instructions to do the welt pockets.  I really did!  Fortunately, I came to my senses before I ruined the dress.  The BS instructions were useless.  Instead, I used  the instructions from Jackets for Real People (Palmer & Alto,  2006) and  made three practice pockets before touching the dress.  These are not the best welt pockets I've ever made. Even with interfacing, the fabric was a little limp to support such a detail.  Next time, I'll use a lighter interfacing on the welt itself. 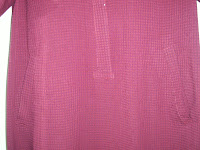 I was so focused on the welt pockets, I was blind-sided by the front band.  I didn't like the way the bottom of the band looked and I did some un-sewing.  The fabric is a rather loose weave and I was a little too heavy-handed with the ripper.   I mangled the fabric pretty badly.   I opted for the "Watergate" approach and tried to fix it by covering it up.  This solution worked better for me than it did for Nixon.  The repair is looks like another design detail. 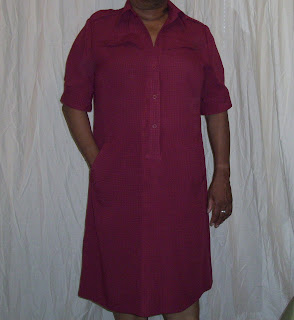 June 15
Once I averted the near disaster at the bottom of the front band, (it's barely visible and looks like it belongs there) construction went along without a hitch. I bought the fabric at JoMar and I'm not totally sure what it is.  Sometimes it feels like cotton, sometimes it feels like wool.  Today, I'm thinking it's a lightweight wool.  It holds a crease like a natural fiber.   As I ironed  it, I was convinced it was cotton.  I'm very happy with the finished dress.   It's loose fitting without being voluminous.  It looks okay without the belt.  And most importantly, it gives me an excuse to buy a new long necklace.
Posted by Elaray at 6:00 PM